Over the Labor Day weekend, Matt and I decided it was a good time to purchase some drywall and put them up in the spare room. Finally! I have dreams of having a guest room but I think Matt has something different in mind.

Back in January we had torn down the old drywall and replaced all of the crappy insulation that had probably been there since the house was built in 1947, with new 2014 insulation!

After we had gotten everything cleared out, Matt set to rewiring the entire room along with adding a few extra outlets. When we first moved in, he had hired an electrician for a day and the man gave him a crash course in rewiring the house. Since then, Matt has done all of the electrical work for the house himself. It saves us a lot of money and just makes him all the more of a badass. I even assisted with wiring in the outlets. It was time consuming and it pissed me off, like most home improvement things do, but we got all of the outlets in the room working!

This is what an outlet typically looks like all gutted out. You take an electrical box, drill it in a post and feed the wires through the top.

These little contacts (metal knobs) on both sides of the outlet tell you which wires to put where. 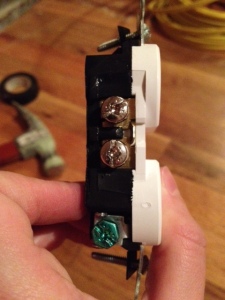 You measure out and cut the wires, then wrap them around the appropriate contacts and screw the contact down to be sure that the wire stays put. If it comes loose, it won’t work. 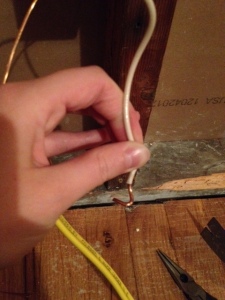 When all the wires have been wrapped and screwed in, you’re faced with the most ANNOYING part of trying to shove everything back into the box and screwing the outlet into the box. It it so irritating, but somehow I managed to get this one in.

And now to test the outlet. There is light! 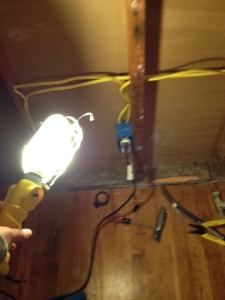 After we had taken care of these things we kind of took a hiatus from that room. Money and the fact summer was coming up had us focus on things elsewhere, like our garden and yard. But we finally decided it was time to continue on.

Saturday morning we drove to Home Depot and purchased 9 sheets of drywall. Two sheets were taped together making it extra heavy and difficult to pick them up and throw them on one of their handy carts. Sure we could’ve split them up but it would’ve been more work.

I really don’t know how we didn’t kill each other, but we eventually got the drywall into my uncle’s van and into our house ourselves. After that we set to work. Matt measured and cut the drywall while I screwed it all into the studs. Neither job was very easy and there was a lot of cursing in that tiny little room. The entire weekend was definitely a test on our relationship, but I’m happy to say we made it through without killing each other. If you can’t make it through a common home improvement project together, how would you expect to get married, have kids and basically be around each other the rest of your natural born lives? Exactly. So yay for us. He’s a keeper. He’s also super sexy when he’s cutting and measuring drywall. But I digress.

That weekend we finished in putting all the drywall up – we just had a few touch ups to do. Some of those screws were really difficult to screw into the studs, so we had to go back over the walls and make sure none of them were sticking out. We also had a few gaps that we needed to fill with another sliver of drywall, so we did all of that yesterday and readied the room for taping and mudding.

This morning, after Matt left to go on a bike ride with our dads and some friends, I changed into my work clothes, blasted the radio and set right to work mudding.

I haven’t done any of this in almost 2 years, so I was pleased that everything I had learned then I still knew now. And also, that I was still good at it.

For those of you who are unfamiliar with this type of work, when you mud a room it basically means you are trying to fill or smooth out any holes or blemishes in the walls to hopefully get a nice smooth surface. If you were to look at the walls we did in our living room and kitchen, you can tell it was our first time. Even looking at it now, it makes me cringe and I wish I could set right back to work fixing it. But with that comes a messy house and right now, we definitely could not handle that. Matt says we need to concentrate on one project at a time. He’s so smart sometimes.

Anyway, back to the room. All of the screws had to get a coat of mud over them – ALL of them. And the corners and seams needed tape and mudding as well. With the tape, you cut a strip to lay across a seam and then mud over it. The tape is vital for putting up walls. If you don’t have the tape down, your walls could potentially crack. It also gives the mud something to stick to as the drywall is relatively smooth.

I spent all day working on that room. A solid 8 hours with some breaks of course, but I finally finished the first coat of mud. We will need to do some sanding next to smooth it and out and some more mudding. It’s definitely a long process but if you get it right, it can look great. We don’t have a deadline for this room like we did for the living room and kitchen, so we intend to take our time getting everything perfect. And Matt wants to smooth out the ceiling as it is currently textured. He HATES texture and I don’t blame him. Although I wouldn’t hate having it, I definitely do prefer having smoother walls and ceilings. It just takes SO much work trying to smooth and sand out everything. With smoother walls, you see the blemishes way easier.

I am so exhausted. It’s not exactly what you would call “hard” work, but it definitely is time consuming. But we are just that much closer to getting paint on the walls and having a new guest room. Or office. Or whatever we want. 🙂