It’s funny how at the most random times – when you stop, slow down and take a moment to yourself, something can blind side you, hit you like an oncoming train with absolutely no warning. There are things that can haunt you, years after they’ve happened, something you won’t be thinking of but is constantly with you. You go on with your life, live your day-to-day, but when you let your guard down, it hits you. That wave of emotion, pain, despair. That oncoming train.

The days my grandfather’s died a piece of myself died. I can only imagine how it will be later in life when I have to watch my parents, my brother, my extended family go. My husband or friends. I can’t imagine how much more pain I can feel. Nor do I want to. Those two days, separated by 7 years, have left my heart heavy. And when I think of them, everything is still so clear. The tears, the pain.

My grandfather would be 91 today. He lived a long life passing at the age of 88. Death is inevitable and for someone so old – it was only right. I should’ve rejoiced at the long life he had. Yet, still, I felt so much anger. I had lost my mother’s father years before. Maybe it was just the rude awakening that this wasn’t a fluke like I felt my Papa’s death had been. It was the realization that this was it. I was getting older and this was going to happen. The head of our family was gone and now it is only a matter of time before the rest of us are gone.

It was Thanksgiving Day 2011. I had just arrived at my dad’s house to celebrate with him when my grandmother called. My grandfather had been taken to the hospital the day before but this wasn’t all that uncommon. He had been falling and having some medical issues but he always came out of it fine. This time it had felt different though. I had had a feeling something bad was about to happen. As my I watched my father answer the phone and listen to what my grandmother was saying, his eyes immediately darted to mine. And I lost it. I knew.

Our entire family gathered that night at the hospital. We cried, we hugged, we held his hand and spoke to him. He wasn’t gone yet, but he soon would be. The hardest thing I ever have had to do in my life is watch both of my grandfather’s die. It chips at your emotions, a constant roller coaster of wondering if this is “it”. For the rest of that weekend we practically lived at the hospital, going home only to sleep. Wanting to soak up as much time with him as we could.

Monday morning at work I went directly to my manager and told him what was going on. That if I were to get a phone call I would be leaving. It wasn’t much later that it finally happened. My brother was on his way to the hospital when he called me and said our cousin Amy had told him that he didn’t have much more time. A matter of hours or so. He said he would call me when he got there to let me know if I needed to leave or not. About fifteen minutes later I texted Amy and asked her if she thought I should leave. And then she called. And I just stared at my phone. Knowing what would happen when I answered it. When I finally picked up I heard her struggling through her sobs. “He’s gone.” I remember trying to keep it together as I was falling apart. I told her I would be there soon and as I hung up my coworkers rushed to me to ask what was wrong and hugged me as I cried.

I barely remember the drive to the hospital. Traffic was light. It was 11am on a Monday and I didn’t care that I was speeding. I silently dared a cop to pull me over. Although, what did it matter now that he was gone?

I half ran, half walked to his room that I barely remembered where it was. Only the day before, they had moved him to the other side of the hospital when his condition turned worse.

As I opened the door I saw my grandmother, 2 of my cousins, my aunt and my brother. All silent. All sad. My eyes then darted to my grandfather lying on his bed. Lifeless. Gone. His nose was bruised where his breathing mask had been. He looked like he was sleeping. And the tears fell silently as I stood by his bedside.

One by one we watched the rest of our family trickle in throughout the day. One by one we cried, hugged and watched as they had their turn at his side as a million memories came rushing back to us.

Later, my brother and I finally left and grabbed a quick dinner. We were exhausted and hungry. We hadn’t eaten all day. As we ate in silence my brother finally looked at me and said “Well, we have no more grandpa’s.”

No, we did not. What a strange feeling.

The funeral was a week later. The 6 grandsons were pallbearers while the 7 granddaughters spoke or brought up gifts during the funeral. I spoke a passage from the bible. My father did the eulogy. The tears came as he finished, the last words of it echoing through my mind, giving me chills. Grandpa lives on in all of us.

Death is imminent. Is expected. Yet it takes something from you as you are forced to watch your loved ones taken from you. Forced to continue on in life without that one person. It seems so unfair that we have to be left behind.

My family grew closer during that time. Time has proven to us that no matter how big of a family you are or how many miles separates you, love will always keep you together. Cherish these moments. You never know how much more time you’ll have.

Without family, there is no life.

My brother and cousins with the casket.

My brother at the funeral. 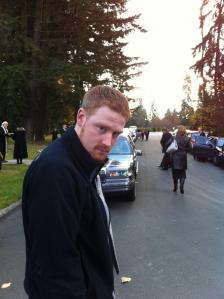 My grandma and grandpa dancing.

The very last picture I ever took with my grandfather. Early 2011.