So I’m going to go on a random tangent here – only because I hit the gym this morning for the first time since last week (I’ve been running and biking ok!) and thanks to my friend Tricia‘s blog where she talks about fitness most days, I was inspired to put down not my own fitness advice, but the things that irk me most when I’m trying to lift dumbbells over my head.

1 – Talking on your cell phone

What IS that? Why is your cell phone even with you on the gym floor? I am a firm believer that you keep your phone in the locker room. Period. But call me old fashioned. Some people make the excuse that they listen to music on their phone. Get an iPod. Or if you’re like me who accidentally washed their iPod, be left with your own thoughts or the fun music you can barely hear over the PA. Or at the very least put your phone on airplane mode. The only time I feel it would ever be acceptable to pick up a call is if you’re waiting for news on a) someone going into labor or b) someone dying. Call me morbid or crazy but I just feel it’s unnecessary. This morning I left the house without my cell phone and realized if I were to get hit by a car or kidnapped, I didn’t know Matt’s number by heart. In this age of technology, it’s become harder to memorize someone’s number as you just have to “save” it in your phone. So I literally walked back into my house, looked at his number, and then repeated it as I ran to the gym. With my ID on me.

But I’m getting off topic – not only could it cause you harm if you were attempting to work out AND talk at the same time, but it’s just downright annoying and rude. While you sit there on the machine I want to use and gab about god knows what, I could’ve done 3 sets by now. Take it outside.

This goes right along with talking on your cell phone. Nothing annoys me more as I watch someone do a set of squats and then pick up their phone to respond to their friend. I mean, seriously, can it not wait? The longer you wait in between sets, the less great of a workout you may get as well. If I’m talking to someone right before I go out onto the floor I’ll simply say “Hey I’m about to go on the floor, I’ll text you after.” Do you really need to maintain the conversation you’re having that is so unimportant it doesn’t even constitute a phone call? No. You don’t.

Okay so the first 3 on my list all pretty much go under “Using your cell phone at the gym”, but I felt they each deserved their own category. Now let me get one thing straight here, I have many, MANY friends who take selfies at the gym and I understand why each and every one of them do it. Whether it be an ego boost, bragging rights, a sacrificial selfie for your blog post, I get it, I do it too. But not at the gym in the middle of a work out. Again, this goes with not taking the time to focus on what you’re at the gym for – your health. Being constantly distracted by your phone won’t help your workout at all. Not to mention you risk damaging your phone. I had a friend who had his phone in his back pocket, was doing a squat, fell and landed on his phone. Totally could’ve been avoided if it had been in his locker!

Another thing that should be pointed out here – taking photos of other people at the gym. Even if it were to compliment them – it’s just not cool. How would you like to be the subject of somebody else’s random Facebook photo?

I’m personally not one of those people who like to workout with others. I’m fairly certain it has to do with working out with my father when I was a teenager. He worked graveyard so Saturday morning gym sessions were typically a Saturday afternoon gym session since he liked to sleep in and take his time in the morning. Understandably so. However, I liked to get up, get out and get home and showered before noon. And then, when we did work out, it basically turned into us yelling at each other (at a reasonable, non embarrassing level). But damnit if every single time we didn’t have a kickass workout. But basically, I just don’t like to abide by other people’s schedules. If I want to work out, I want to work out now, not wait for other people. It’s just how I work.

One time, while working out by myself of course, I spotted 2 teenage girls, probably a few years younger than I was (I was about 18 at the time). All they were doing was sitting on two different machines (ones I wanted to use mind you) and talking. Just TALKING. Why must you do that while sitting on machines? Can’t you go to a corner and talk? At the time, I seriously debated asking them if they would move. I know it’s not a rude thing to ask, but I really don’t like risking pissing someone off, even though they were pissing me off. So I do what I always do, I left to do something else and kept coming back to see if they were gone.

By the way, they were still there talking on the machines when I left.

5 – Spending an eternity on a machine

We’ve all been guilty of it. Sometimes, when I have something on my mind, I’ll finish my set and suddenly realize I’ve been sitting there for 2 minutes zoning out. And that’s fine. But what I’m talking about are those people who just sit there. Like SIT there. And do nothing. Or text, or talk on their cell phone or take a selfie. And just do nothing. Why are you not moving your ass? I would like to use that machine please!

I’m not just talking about the women who like to walk around in shorts that actually looks to be underwear from Victoria’s Secret “cheeky” collection, the men who come in “tank tops” that are basically an excuse to show off their abs without taking off their shirt or the girls who come in in full on makeup (what is the point?!). But the people who come in and workout in jeans. Jeans. I have seen this a few times actually. My assumption is that they are either new to working out and have yet to go shopping or they had some time to kill but forgot their gym clothes at home and did not want to risk losing a gym session because of it. I have nothing further to say other than I just don’t understand. It looks so uncomfortable. 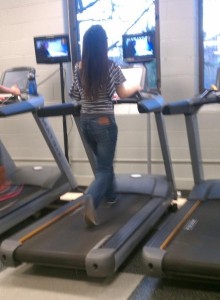 Sometimes we all let out a grunt or six. You’re lifting something heavy, it hurts and you are NOT happy. But I just don’t understand the people who are repeatedly making LOUD noises that can be heard all over the gym. Not that you were – but now you don’t have to wonder what they sound like in bed because you and everyone else around you, already know.

8 – People who choose a machine RIGHT NEXT to yours

I equate this with a man choosing a urinal next to another man when all the rest are open. Do they want the company? Maybe the gym won’t feel as big and empty if they decide to run right next to you.

Don’t be that guy. Remember your deodorant. It’s hard enough working out at the gym without having to smell someone from 5 feet away. And it LINGERS. You were at the water fountain 2 minutes ago but when I walk up I can still smell the essence of dude who didn’t put his deodorant on. And my mouth was open! Come on bro let’s get it together.

10 – Personal trainers roping you into a session

Honestly out of everything we’ve just been over, I think this is the one that irritates me the most. At my gym, they have conveniently put the scale right next to the personal trainers computers. I’m sure this is no mistake. I’ve been working out at 24 Hour Fitness since I was 14 and have used 4 different locations in the greater Seattle area. But I have only been approached and roped into my “free training session” at the one I use regularly now. Maybe it’s because it’s a newer location or they’re hiring more personal trainers who need to gain clientele, but it’s just irritating. All 3 times I’ve been approached it was while I was trying to weigh myself. I should’ve never thrown out my POS $20 scale from Target. And since saying “I really don’t have the money right now” doesn’t work because you know – it’s your FREE session – I schedule an appointment and then promptly call and cancel a few days later. The person on the phone doesn’t seem to care why you’re canceling, although once, someone did try to connect me to the PT I had scheduled with. Thank god they were with a client. But then it is kind of awkward when you see them at the gym after you’ve canceled and know they’re looking at you. And judging. Or so I seem to make up in my mind.

I would like to add that these are simply my own opinions and are not meant to insult anyone.

Tell me in the comments – what annoys you at the gym? Or – why do you do any of the things listed above?